All objects with a temperature above absolute zero (0 Kelvin / -273.15 °C) emit heat in the form of infrared radiation. The warmer and/or larger the object is, the more radiation it emits.
A PIR sensor (Passive Infra Red sensor) is designed to detect this infrared radiation.

A PIR sensor consists of two sensors positioned next to each other in a metal housing behind an IR permeable window. These sensors are made of IR sensitive material, pyroelectric sensors. These sensors detect IR radiation. A PIR sensor measures the differences in detected radiation between these two sensors.
When everything is at rest, both sensors will receive the same amount of IR radiation, this is the ambient radiation. The sensors and thus the smart-alarm will adjust to this. 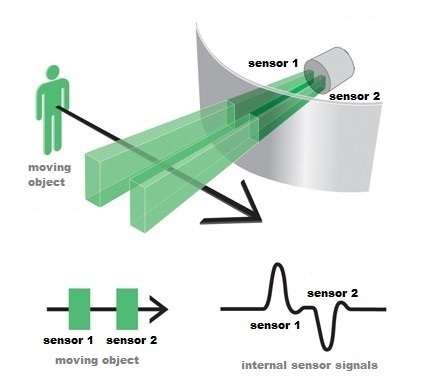